The Brisbane City Council have finally given in to pressure from green-fingered residents and now has a policy to allow gardening on verges or native strips in front of houses. Their guidelines were announced in August 2016 and updated in March 2017. They can be accessed here and the Brisbane Times article with some interesting comments below here. 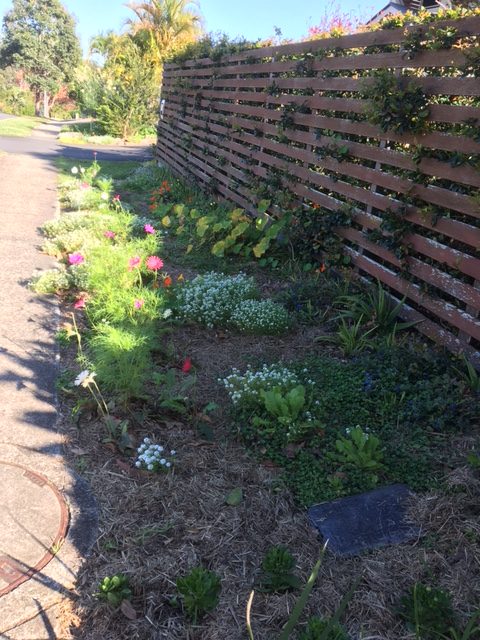 Flowers on the strip between the front fence and the concrete path.

Criticism of the BCC Guidelines

There was immediate criticism of the BCC guidelines from vegetable verge garden enthusiasts for its narrow list of recommended plants but while the BCC guidelines don’t encourage food crops, they don’t exclude them either. After all, where is the dividing line between edible and ornamental? In their zeal to promote communal food growing, enthusiasts can forget that the land is public and you need to consider and manage the reactions of neighbours and others affected.

I was happy that the guidelines allowed me to add thin layers of sugar cane mulch to help the soil, and contrasting tea tree mulch to mark out the path for the postman but have been somewhat dismayed at the suggestions made by some advocates. Jerry Coleby-Wiliams has brought the voice of experience to the debate.

In October 2015, with a council election just months away, the BCC promised to consult with Jerry in the creation of a verge gardening policy after a public outcry (ABC story) when they threatened a resident at Norman Park with heavy fines. For some reason, five months after the election, the BCC appeared to go it alone and brought out a what looks like a rushed policy without taking advantage of his considerable knowledge and professional experience working with councils managing verge gardeners.

Let us hope that in 2017, that the BCC fulfills its promise and comes up with a second, more comprehensive policy with Jerry’s assistance.

Followers of Jerry’s facebook page will have seen some recent posts regarding some of the issues that verge gardening raises including soil contamination, safety, and biosecurity. Let us hope that in 2017, that the BCC fulfills its promise and comes up with a second, more comprehensive policy with Jerry’s assistance. There is no need for councillors to go on trips seeing what is done elsewhere when we have an expert here on our own patch. If you would like to do more than hope, take the time to contact your local councillor.

What about trip hazards?

A common trip hazard is border edges but one of the significant changes with the verge guidelines is that council now permits organic mulch.  I use a thin layer of cane mulch to protect the soil. It is flush with the path so is even less of a trip hazard than the common furrows made by whippersnippers. Tea-tree mulch on the postman’s path through the garden signifies the different function without a need for border edging.

The edible verge movement has created a lot of interest but low-growing natives and hardy flowers are good options too. They have many of the same community-building effects of edible verge gardens and are less likely to be an issue with neighbours if this is the first verge garden in the street.

For a balanced and sensible view of verge gardening, and some background about his fight to bring footpath gardening to Brisbane, see Jerry Coleby-Williams’s website:

Here are some links and articles about councils around Australia and verge gardens.

The Shady Lanes Project has a directory of verge garden policies from councils around Australia.