Bamboo to Block the Western Sun

There are two ways to get shade – to build it or to grow it – and I need shade on the western side of the house.

When we moved here there was a mock orange hedge – horrible thing.  It was two metres high but didn’t block the sun, it billowed out and filled in the narrow passage, and it needed constant trimming.  So, we paid the man to come and take it away.

That left the side passage feeling wide enough to become a useful space but a boring grey wooden fence and a patch which received shade from the house until mid-late morning, a couple of hours of intense midday sun on the ground, and late afternoon sun hitting the western side of the house and streaming into the windows.

The ground was like concrete – so hard that the couch weed struggled to survive. The fence sat on a retaining wall about a metre high. The side passage also has a tendency to become a wind tunnel. What to do?

I’ve been trying various plants in pots to see if they would survive. Sunflowers were magnificent until flattened by the wind. Geraniums and nasturtiums manage in the soil but are no use for shade.  Some lemon trees in pots were doing well until the ants started farming on one and the fence provided a great ladder for the ants – so the side orchard was not to be. But a bamboo plant in a pot did well and the idea of bamboo sunshade was born. 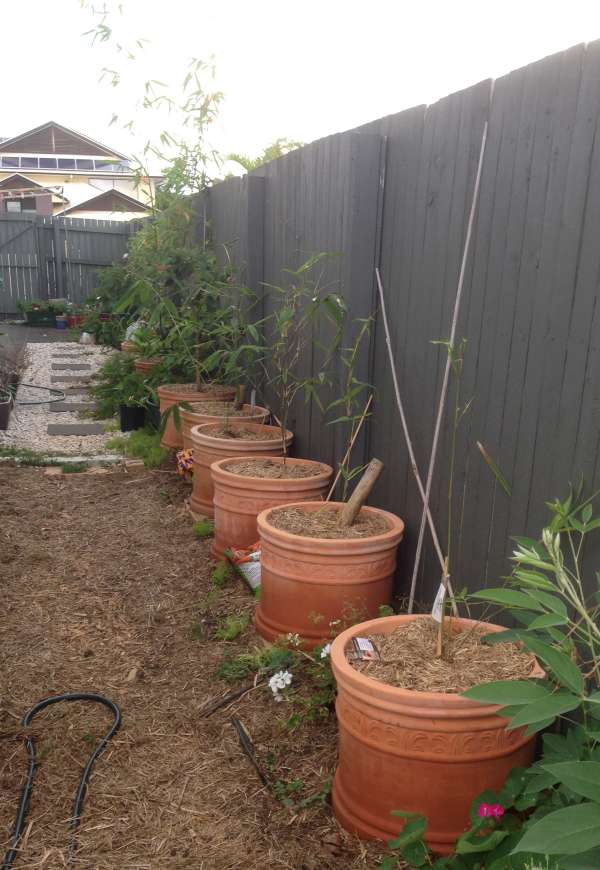 Clumping bamboo or not, they are not going in the ground right at the side of a retaining wall and only a couple of metres from the house. Heavy terracotta pots, perfectly cylindrical so they are more stable, should contain the bamboo while instantly adding 50cm to their height.

I bought 6 plants to add to the existing one – so there are 7 different bamboos – more a collection than a hedge.

As a bonus, I have discovered the bench against the wall facing the bamboo is the coolest place to sit on a summer morning.