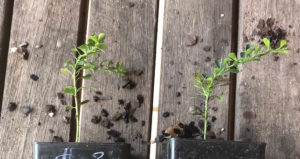 I have a larger finger lime – CSIRO grafted version – bought a couple of years ago. It’s been moved a couple of times after not being happy in its spot. Finger Limes – tubestock December 2019 I’ve bought two tubestock from Kumbartcho Nursery December 2019 – much cheaper to experiment with. These will take [...]

Bought: Nambour Garden Show July 2016Planted: Against back fence to climb on wires (southfacing, gets sun in summer)Prefers full sun or part-shadePruning after flowering can restrain growth and plants respond well to hard pruning. Pandorea Jasminoides – Bower of Beautyclimbing on back fence February 2019(It’s in a large pot along the back fence.  A second [...]