I’m Planting on the Verge

The land is public so you need to consider and manage the reactions of neighbours and others affected.

Verge gardens can be, but don’t have to be, food gardens. More important than the suggestion of individual plants are the general guidelines which allows you to choose your own plants that fit your location, soil, taste, lifestyle and aims – just like the rest of your garden. However, planting out a verge has one extra dimension to your garden. The land is public so you need to consider and manage the reactions of neighbours and others affected.

On our verge, I grow mainly flowers for the bees – and passers-by. Here is what is behind my decisions on what to plant. 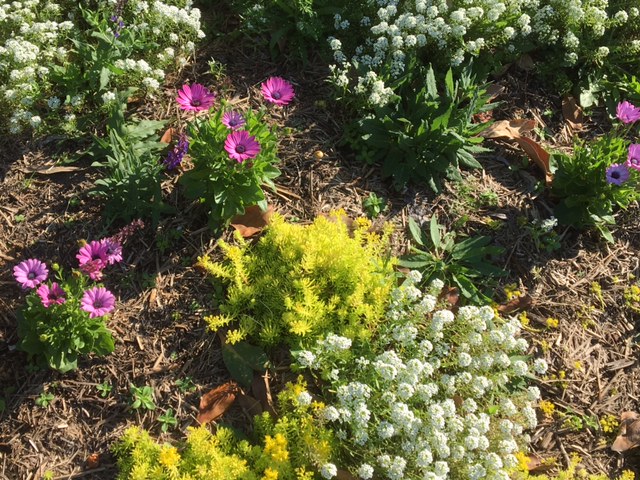 Sedum, Alyssum, Osteospermum and Salvias on the verge

Border edges around garden beds tend to create trip hazards. I have treated the entire rectangle between the front fence and the concrete footpath as one large bed. This gives it three automatic edges – the fence at the back, the path at the front, and the driveway along one side.

The BCC verge guidelines permit organic mulch so I use a thin layer of cane mulch to protect the soil and make it flush with the path and driveway. This makes it even less of a trip hazard than the common furrows made by whippersnippers.

The mulch rules also made is possible to create a clear path through the bed with a constrasting mulch for the postie. I chose tea-tree and trampled it well to make it firm. The contrast signifies the different function without a need for border edging. Tea-tree mulch also holds well and isn’t dislodged by the bike. 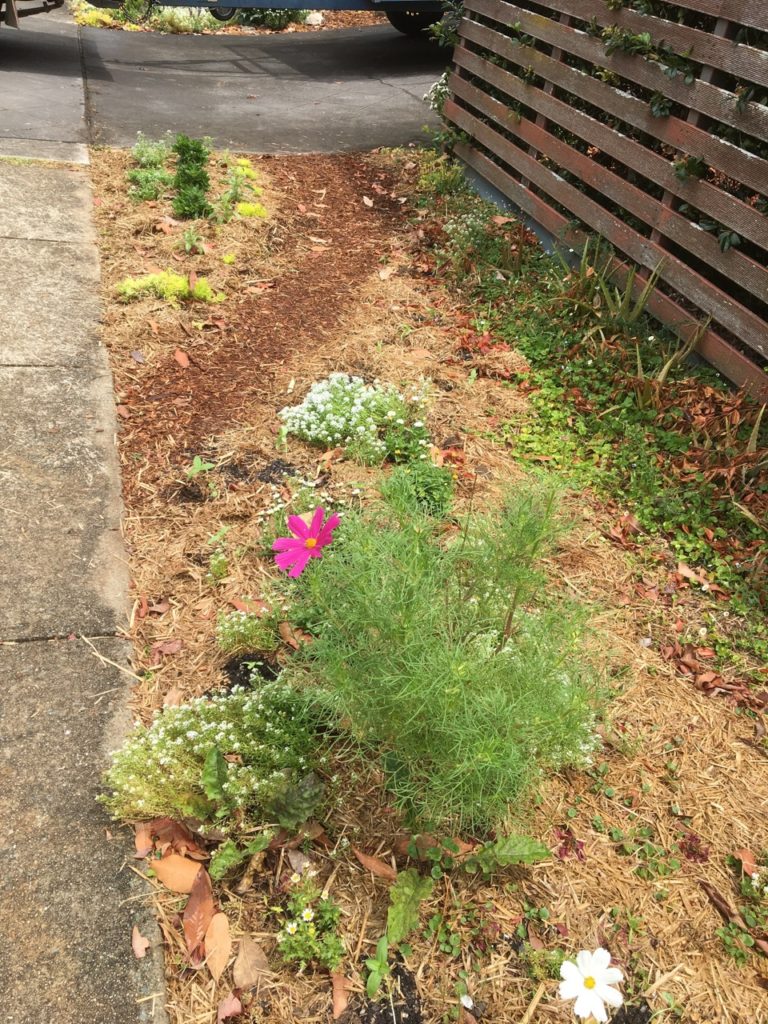 Darker path for the postie using compacted teatree mulch. The plants either side of the path have grown quickly to create a corridor. Tip: watch the path made by the bike wheels to get the curve right.

It important to remember that the verge is public land even though you do the maintenance. If your design acknowledge the needs of other people, they are more likely to approve of your verge garden.

The edible verge movement has created a lot of interest but low-growing natives and flowers are good options too. For the garden between fence and path, I’m planting flowers to encourage the pollinators.

Flowers create many of the same community-building effects of edible verge gardens and are less likely to be an issue with neighbours when this is the first verge garden in the street.

I have met many people since planting flowers on the verge. If I’m outside, they often stop and comment. Some like to see the changes in flowers as they pass on the way to the bus each day.

Sometimes I hear children’s voices, excited at seeing flowers, and the beginning of family conversations.  The cosmos grew tall and cheerful – adults reach out to touch them without having to bend. 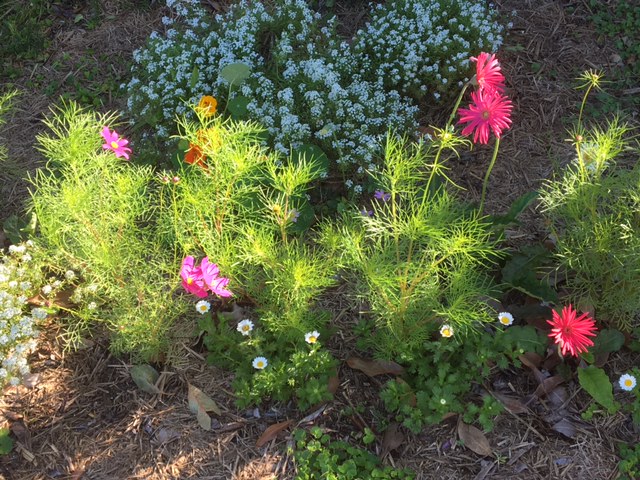 Cosmos thrived and grew to well over 60cm – a good height for passing pedestrians – and provide some shelter for alyssum, gerberas and chrysanthemum

Why Not a Vegie Verge?

I can think of lots of reasons to grow edibles inside my garden rather than on the verge.

If you are into building community, I think flowers are far better than edibles. A bed of flowers is a much less confrontation offering that reaches a wider cross-section of people. One flower can cheer up many people, the benefit of the vegetable is only to the person who harvests it.

Both flowers and natives encourage wildlife and help create wildlife corridors. Watching some fairy wrens or butterflies, or spotting a blue tongue, feeds conversation and can inspire children’s interests in the environment.

You can still make friends on the verge; put out your excess produce for passersby; and swap plants or produce with neighbours.