To save space and effort, I decided to do away with the compost bin and install more free-range worm stations instead. Worm farms need to be sealed to exclude wildlife and easy to access for regular addition of kitchen scraps. 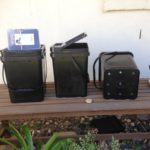 This is the latest version to try.  I bought a set of 3 Little Rotters from Kookaburra Worm Farms.  Each comes with a “worm bomb”. I’ve found the worms from Kookaburra far superior to others I’ve tried.

This one is in the top vegetable bed on the east side of the house.  I put in some almost completed compost, the worm bomb, some shredded paper and a little food to get them started.  Also a small dollop of grown-up worms from the grounded worm cafe.

They have performed well and portability is an extra benefit.  They can be picked up and moved to get away from sun, or to give a different garden area a boost.