With the street tree planted in late April, the cooler weather and recent rain meant that May was the month for completing Stage 3 of the verge. It is the largest part, between the concrete path and the kerb.  The traffic calming means that I don’t have to worry about people alighting from parked cars but there needs to be a path just in case any pedestrians decide to cross at the traffic island rather than nearby driveways.

The soil in this patch varies from dry, dusty clay to damp, gluggy clay closer to the driveway. The grass is weedy. My plan is to take out as many weeds as possible and get tubestock planted quickly so their roots can help the soil. 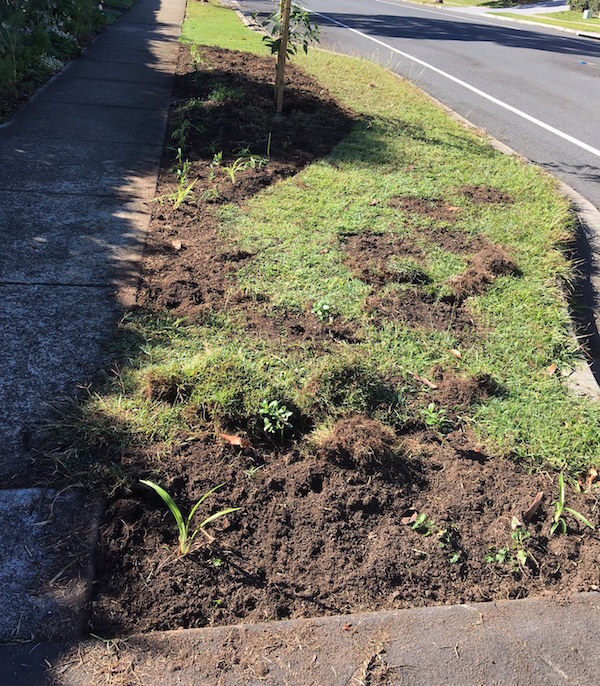 The bed around the street tree was first and already has a scaevola plant, dianella and midyim berry tubestocks. Strands of native violets and dichondra repens transferred from the garden will become living mulch. Squares of turf (front right) were taken out to get westringia tubestocks in quickly rather than waiting until the entire patch was dug. 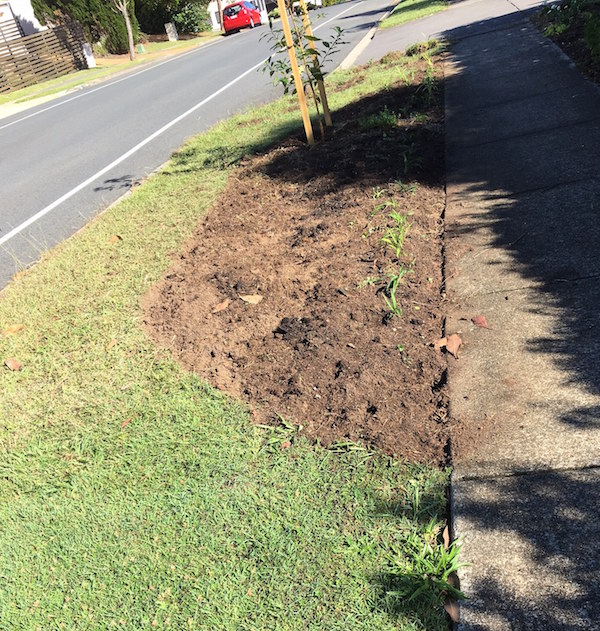 The same bed looking west. The soil this end was much drier. Somewhere under this grass are sewer pipes but I am only digging with a garden fork and only deep enough to loosen the grass roots. Judging from the position of the disc on the kerb, the pipes are probably beneath the new path. 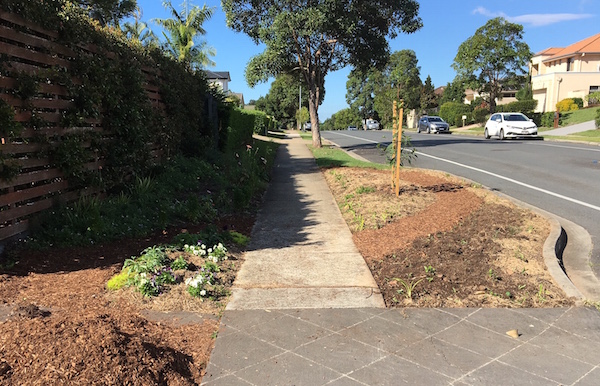 Removing the grass and weeds around the kerb was difficult and care had to be taken to step back from the edge when cars came by. I’m only putting a thin film of sugar cane mulch on the beds partly because it’s a native bed but also because it is important that mulch is not washed into the stormwater drains during heavy rains.

At the front right of the photo above are some westringia tubestocks (to be cloud-pruned low), a local myoporum, dianella and native violets. BCC guidelines forbid garden edging so I’ve planted alyssum seedlings along both edges of the path. It’s not a native but alyssum is a cheerful and adaptable plant, much-loved by the bees, that seems to blend in with almost any style of garden.

While I removed the weeds where the beds would be, I took a shortcut and used layers of newspaper and a thick layer of Red Cypress mulch over the grass for the path. The tea tree mulch that made the postie’s path on the left was almost gone so I used this mulch there as well. The remaining mulch (bottom left) is for verge stage 4 and for topping up paths inside the garden.

I have had quite a few pedestrians, and a couple of drivers stop and talk about what I am doing. Many drivers wave as they go by. They have all been very positive about it. Some say they are thinking about doing the same.  One neighbour ordered a street tree and it was planted last week. Another is thinking about getting a street tree and replacing turf with flowering plants.

Just imagine our streets were lined with real native and flower verges. It would make walking more pleasant and interesting for people but, perhaps more importantly, it would help build corridors for pollinators and other wildlife.

See what this part of the verge looks like at the end of July here.