For me, the first role of the garden is to provide habitat for the many beneficial creatures – from the native bees and lizards to the small birds to the possums. There was a front hedge when we moved in – extremely trimmed lillypilly, now much less formal. It’s on the south border so it made sense to make the hedge and west-facing adjoining fence/wall the native corner.  The wall and fence together are more than 2 metres high so it gets no morning sun, full midday sun, and late afternoon sun. I made a native strip along front half of the east retaining wall and fence (west facing). Inside this is a second native bed.

The native strip is just over a metre wide. The ground was covered with the dreaded couch grass until it got the chookpoo-newspaper-mulch treatment.  Towards the front (right of above photo) the ground slopes down to the front hedge.  The northern high part is solid clay, the southern, sloped part is friable and easily turns to dust. 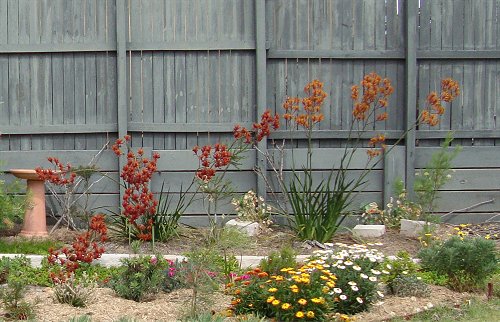 The garden border is made from sandstone blocks, then a path dug lower to allow groundwater to move from the mid-garden to the front where it was ponding, down to lower ground and badly compacted soil.  In the foreground is the native bed. I use very small shrubs to save digging.

Original plants in the native strip include… 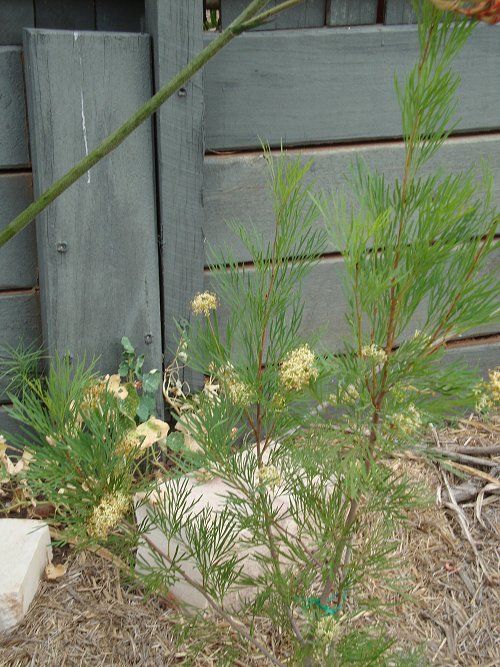