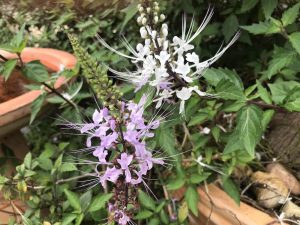 Bought as tubestock at Kumbartcho Nursery 10/12/2016 Planted at the base of a birdbath by the back tap. The little birds – fairy wrens, brown honeyeaters and willy wagtails, perch on the bottle tree, take a dip, then back up to dry. The purple-flowered Orthosiphon aristatus doesn’t seem as hardy as the white with purple tips. [...]

Also known as snake vine, climbing Guinea flower or golden Guinea vine Tubestock from Kumbartcho, planted in north-east corner near fence – January 2017 Strikes well from cuttings. One against eastern wall. One growing up dividing fence on western side. http://anpsa.org.au/h-sca.html a fairly vigorous climber or scrambler, growing to 2 to 5 metres long. It [...]