Our bus stop had a revamp last year. The old seat with its back to the road was removed, a new slab laid, and we waited to see what would take its place. Perhaps it would get a bus shelter like the one on the other side of the road, especially as this one is far more exposed.

The work was completed and this is what we got – inviting, eh? 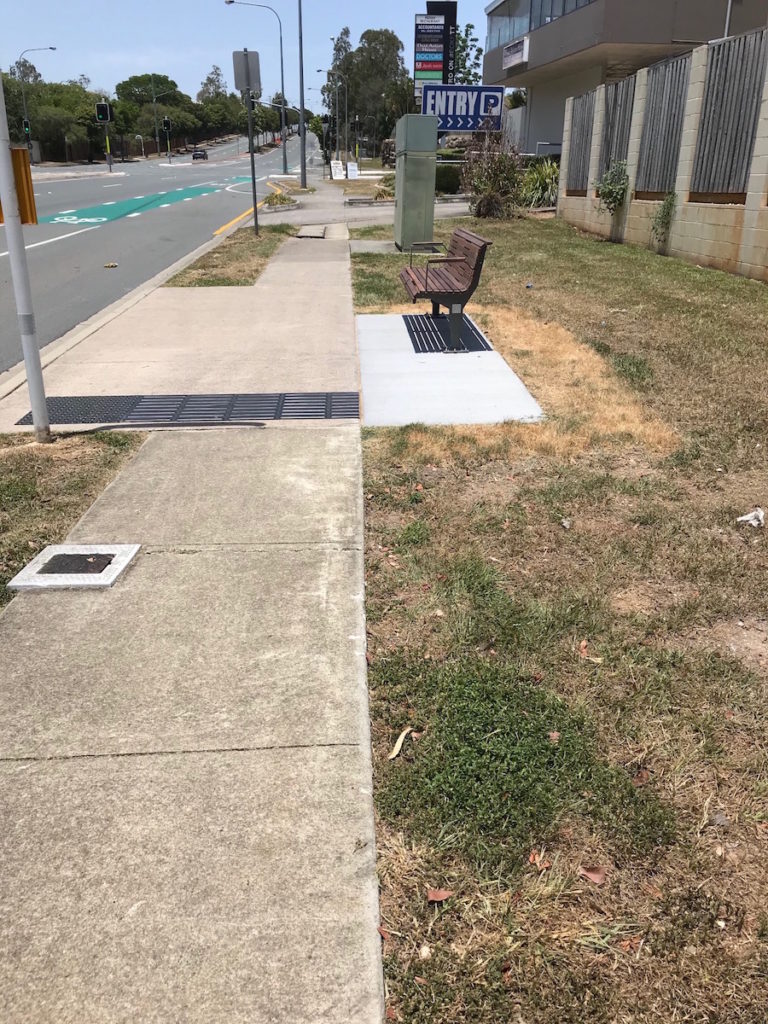 The only shade is under the seat. There’s a lot of space here to do something better.

I contacted Brisbane City Council to ask whether this was it. Why go to the expense of putting in all that concrete and replacing the seat but not put in a shelter at the same time? Yesterday I got the official response.

The stop doesn’t qualify for a bus shelter because not enough people get on at that bus stop (people getting off don’t count), and it’s done on daily averages so the fact there are lots of school students on school mornings standing in the sun or rain probably gets lost in that.

Also, the outgoing 350 bus doesn’t start early enough to catch a bus to Aspley and transfer to other in-bound buses which means you need to drive and park at Aspley instead.

The reason they would have replaced the slab and seat now is because BCC have an obligation to upgrade all bus stops by 2022 to cater for disabilities – slab slope, sight bumps, seat position.

I asked if they could at least plant trees nearby for some eventual shade. They are going to put in a request to the aborists for me – although BCC is currently not planting new street trees because they die in the heat, but that’s another story.

The workers in council have done the right thing within the policies they have. But this siloed and linear thinking is the sort of thing that stops active transport becoming popular in the suburbs.

Bus stops aren’t just about people getting on a bus. They can also be rest stops for people walking, cycling or just meeting. They can include public noticeboards,  not just advertisements for real estate agents. They affect how comfortable and safe people feel when they wait for a bus, or alight from a bus.

Good bus stops can also help the local economy. This bus stop is near our local shops. Access via active transport has been shown to increase the viability of suburban shops. Once people get in their cars, they tend to drive straight past to the major centres. Local shops rely more on people walking from nearby, or stopping off on the way to and from the bus stop.

With a bit of imagination and creativity, that barren place above could become an important part of our suburban infrastructure and greenspace.