The bed of natives is on the east side of the house in the middle of what was the “lawn”.  It had very poor soil – solid clay – so it got the chookpoo-newspaper-mulch treatment and then some plants were inserted as best I could.  Forget digging holes twice the size of the pot – digging a hole the size of the pot was pushing it.

The native strip acts as a backdrop when looking at this bed from the house and the front entrance. A native path runs behind the bed, separating it from the native strip. The path is cut lower to allow drainage and that edge of the bed has loose stones covering the sloped ground.

Original plants in this bed include… 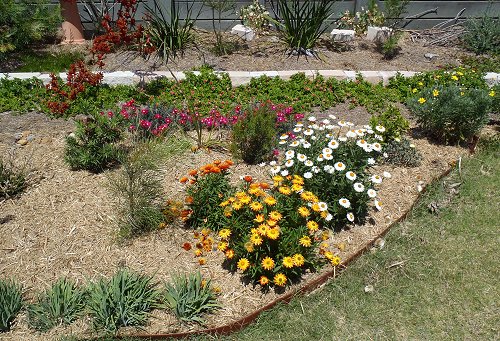 Many are still quite small and the gaps will be filled as they grow. On the right is the first of the Little Sunrays.  Just to the left of the Paper Daisies is the Grevillea Golden Lyre which will grow up to 2 metres high. Foreground is the end of the Sisyrinchium Yellow Stone border (yes, I know it’s not a native.) Plastic edging marked the battlelines with the grass.