This morning, we went for a flower hunt to see how many different flowers there were in the garden, including the verge. Here’s the list: Acacia Fimbriata (Brisbane Wattle) is coming into flower. In the morning sun, it is abuzz. Also popular with birds of all sizes Subtropical Nectarine blossom Graptophyllum ilicifolium (Holly Fuchsia) popular… Read more 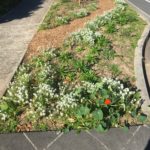 The sunny side of the verge is starting to look more like a garden. The annuals – alyssum, nasturtiums and strawflowers are filling space while the tubestock natives are growing. The alyssum is flowering, attracting bees, keeping weeds down and making the mulch path look like a path – no hard borders are allowed under… Read more 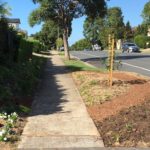 With the street tree planted in late April, the cooler weather and recent rain meant that May was the month for completing Stage 3 of the verge. It is the largest part, between the concrete path and the kerb.  The traffic calming means that I don’t have to worry about people alighting from parked cars… Read more 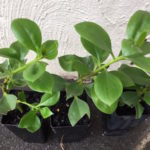 Suggested by a volunteer at Kumbartcho Nursery as a more local Myoporum than the finer leaved ones you buy in the shops, and a very hardy low-growing shrub for the front verge. Small white flowers in Autumn followed by berries. Full sun or semi-shade Grows to approx. 50cm with spread of 1 to 2 metres… Read more 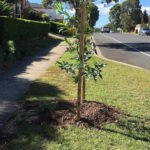 On Friday, our new street tree was installed in line with the blue dot by two friendly workmen from the BCC.  They called it a “Lop Con” short for Lophostemon confertus (Queensland Brush Box), and it’s the same as the others in the street. One neighbour who is also missing a tree has already ordered… Read more

Early March and it’s still very hot, very dry.  Promised rain seems to go around us. On the verge: Gerberas have come up for their second season and are flowering well. The soil has definitely improved. Zinnias are still flowering. A blue dot marks where the street tree will go. March 19, 2017: After yet… Read more 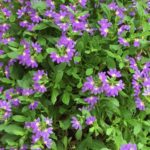 January 2017 was very hot, very dry. Bird baths sometimes needed topping up twice a day. On the verge: Zinnias, salvia, geranium, sedum holding up well. Gerberas have come back to life. Seems too hot for cosmos. Osteospermum struggling and a few plants have given up. Seeds planted in trays – spinach, asparagus pea, capsicum… Read more

Eastern Garden I combined the two metal beds to eliminate the corner sections crushed be the digger during the pool renovation.  In the middle I put a reed avocado tree and created a mound of mixed soil and Activ8. On three sides there is a straw bale extended outwards to the border. This effectively breaks… Read more 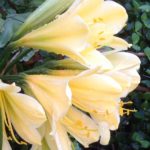 This pale yellow clivia is by the path to the front door. Along the west fence is the more common orange clivia. It has moved around a little but seems to have found its niche. Poor clay soil, deep shade in winter, not so deep in summer. I cut off the seed pods after the… Read more 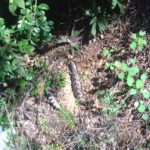 I think we have at least 3 lizards of different generations but this is the first time I have seen two in the same place at the same time. It is a sunny spot in the south-east corner. The sun comes through under the wattle tree and they have found a spot with a heavy… Read more